Cobham was once described as "a creature of the Mole" and it's the river that originally gave the village its reason for existence. Riverhill is where Cobham and the River Mole meet; where the modern town and the almost unchanged countryside merge and where centuries-old traditions of recreation and tranquillity continue to this day. 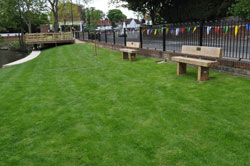 Time and modern life took their toll on this beautiful spot within Cobham's central Conservation area and it fell into disrepair. However a community-wide initiative has returned Riverhill back to its former glory. The Cobham Conservation and Heritage Trust together with local schools, clubs, volunteers, businesses and with the help from Elmbridge Borough Council, raised £150,000 to complete the regeneration project in two years. 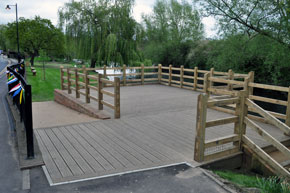 Complicated shuttering work was carried out re-building the river bank, protecting it for many years to come. Crumbling stone steps have been replaced by a state-of-the-art viewing platform (with disabled access) built from sustainable materials. Beautiful views both across the meadows and towards Surrey's oldest example of a working Mill can now be enjoyed from the platform or from one of the four new benches. New pathways have been laid and old pathways re-surfaced making the open space safe and accessible to all, reconnecting the two sides of the village back together again. 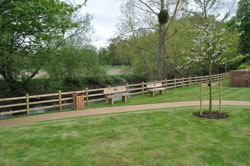 Nettles, weeds and scrub land have been replaced with gently rolling grassy banks. Overhanging trees and rampant shrubs have been pared back opening up the views and creating space. Shrubs, grasses, bulbs and wild meadow planting will greatly increase the area's bio-diversity making it a haven for flora and fauna to flourish.

Gerry Acher Chairman of the Trust is delighted with the success of the project: "Riverhill is a wonderful example of how a community can pull together working in partnership with the Elmbridge Leisure Services Department to make changes for the better. We have been overwhelmed by the generosity of the local people and the local businesses who have donated their time, expertise and money investing in improving such a beautiful local landmark and we can't thank them enough. 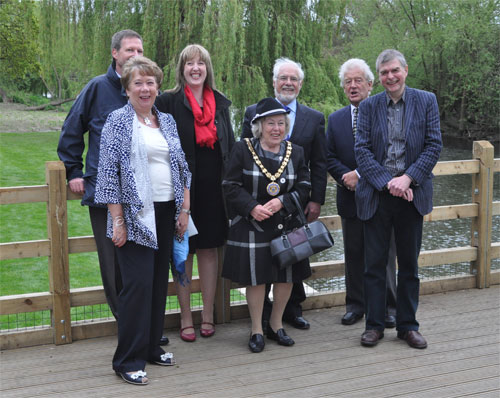