As early as October 1914 Cobham recognised the need to start a record of the names of their men who had gone off to war. The first reference in the Cobham Church Parish Magazine, our prime source for local news of the time, was that “approximately 180 men have joined the Roll of Honour, recording their names as being on active service”.

By November it reported “We believe that well over 200 of our men are serving in one capacity or another in the naval and military forces of the King”.

As the war dragged on and increasing numbers of men were being reported killed or missing the process became more formalised. In February 1916 the Vicar said “I hope with our next issue to be able to present the long list of those this parish has given to active naval or military service. Mrs Leonard Martin of Lych Gate House has taken very great pains with the preparation of this list and she has probably been in personal communication with nearly all the families concerned”. For those of us who do not realise how distinct each of the Cobham areas were at that time he went on to say “Mrs Mount of Poynters is kindly supplying the names of those on active service on the Hatchford side of Cobham Bridge”.

The first version of the Roll was issued with the April 1916 magazine but sadly many names were added over the ensuing years. By the end of the war the list included the names not only of residents but also relatives and others with less direct connections to the village and names of casualties continued to be added into 1919.

The Cobham Roll includes about 415 Cobham names and 60 from Hatchford & Downside. Shown below are the Roll of Honour pages published in the St Andrew’s parish magazine around 1920. Click on the image to view a larger version of each page.

A separate Stoke D'Abernon Roll listed 60 names of which 17 were of those killed. 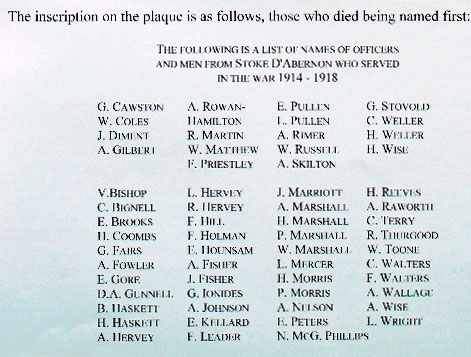