The WWII Avenue of Remembrance - The Tilt, Cobham

Newcomers to the Cobham area often comment on the attractive avenue of cherry trees that line either side of the Stoke Road and the entrance to Mizen Way on the Tilt Green. Typically, they flower late April or early May. 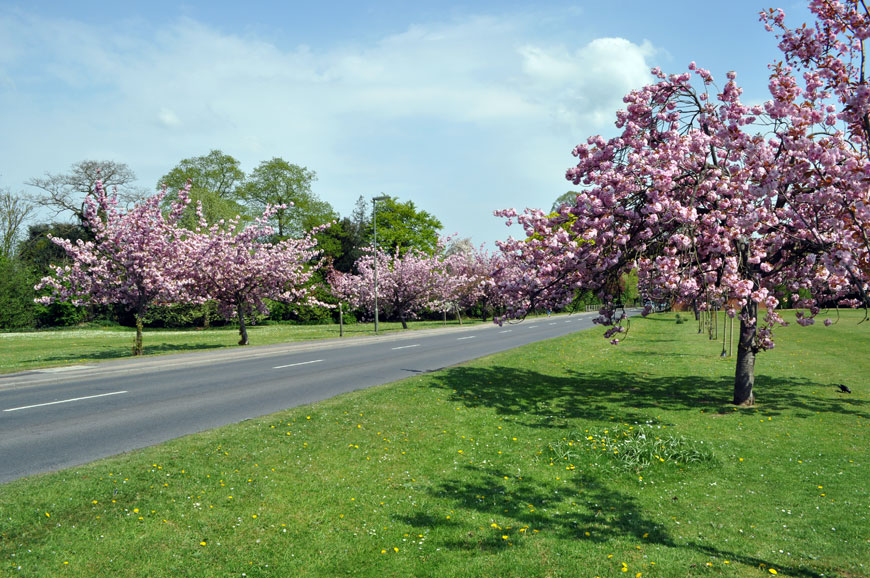 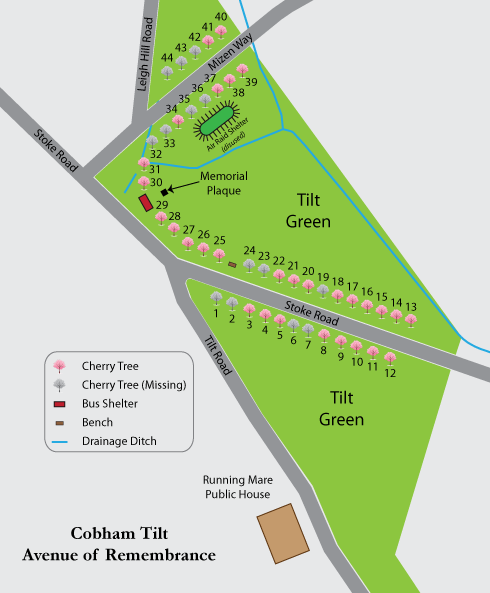 These forty four trees have a special significance as they were planted as a memorial after the Second World War by the Cobham Village Women's Institute with each tree commemorating a life lost from Cobham during the Second World War, 1939-1945. The Dedication Service for the Avenue of Flowering Cherry Trees took place on Sunday 24th February 1946. 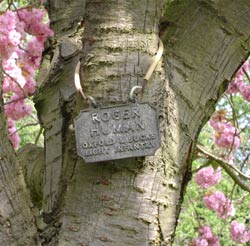 When originally planted each tree had a metal collar with the name of a serviceman. Over time some of these trees have died and although the tree has been replaced, most of these collars have been lost. We know all the names of those commemorated but we don't know for certain which name appeared on which tree. If you know which name appeared on which tree please let us know so we can complete the list shown below? Three serviceman did not have a tree.

Trees replaced more recently have not faired so well. Following an Elmbridge Borough Council public consultation at the end of 2017, it was agreed that all the trees would be replaced to make a uniform avenue once again in honour of the brave serviceman from Cobham who lost their lives in WWII. All the trees were replaced in February 2018.

On the 26th April 2009 the Cobham Conservation and Heritage Trust completed a project to add a memorial plinth as a lasting reminder of those local service people who lost their lives in the Second World War. This project was completed with the help and support of Elmbridge Borough Council, the Cobham Evening Women's Institute, Royal British Legion (Cobham Branch) and St Andrew's Church, Cobham. Further details of the unveiling of the memorial plaque can be found here.

Cobham's official war memorial listing all those who lost their lives in both World Wars is within the Memorial Chapel at St Andrew's Church, Downside Bridge Road, Cobham.

The Tilt Avenue of Remembrance is listed by the Imperial War Museum on its website which can be found here: www.iwm.org.uk/memorials/item/memorial/23222