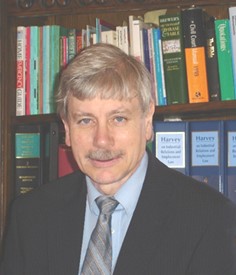 David was born in Hampshire and raised by his aunt Elsie following the death of his mother. He was a boarder at Queen Elizabeth Grammar School in Crediton where he became a high achiever, also gaining the original Duke of Edinburgh Award and becoming a Queen’s Scout. He went on to gain a BA (Hons) at the University of Westminster where he captained their Rugby team. Completing his LLB at Guildford he joined a City Law firm and became a partner.

David was a non-believer, but if he had a religion, it would be called ‘the greater good’. In this he was a true believer.

Aged only 30 he suffered with a respiratory illness and was given a prognosis that he would die before he was 45, but despite this he battled on and lived to the age of 73. He moved to a houseboat in East Molesey and became a vegetarian before moving to Walton on Thames. He joined a private Law practice in Elmbridge and became a volunteer Legal Adviser at Citizens Advice. He married and had two sons before later divorcing, marrying Sue, and gaining two stepsons.

In the ‘80’s, he joined the Liberal Democrat Party and regularly ran as a Local Council Candidate. In one year in Weybridge, he was ‘frightened out of his life’ because he almost got in! He played a major role in the Liberal Party gaining a seat in the Cobham & Downside Ward in 2021 – much of his help and support given from his hospital bed.

He became a key figure immersing himself in the community, working tirelessly for the greater good. He loved the environment and was a lead in developing ‘Transition Cobham’, and the ‘Community Garden’ and serving for many years on the Walton Conservation Area Advisory Committee. In 2009 he joined the Cobham Heritage Trust planning team, before becoming Director and Company Secretary of the Community Chatterbus, and Chairman of the Cobham Branch of the Royal British Legion.

Fittingly, for such a community-minded man, he was awarded a Surrey County Council Chairman’s Award in 2019 for his volunteering work.