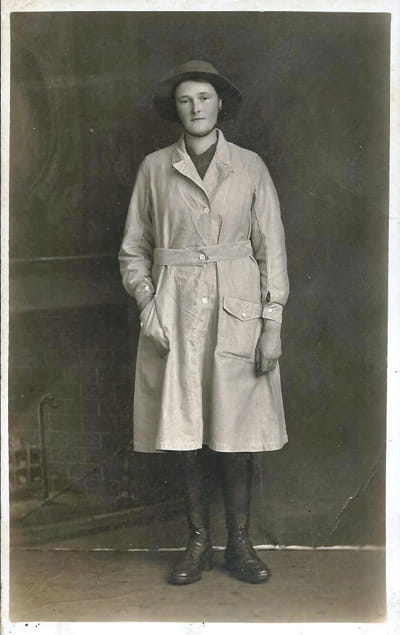 Daisy DanceInformation about working-class women in Cobham in the early 20th century is scarce which makes Daisy Dance special because we do know something about her from photos and artefacts collected by the late Frank Bryan.

His responsible position warranted the 6-room Keepers Cottage in Downside and Daisy's upbringing would have been reasonably comfortable for the period. Her father died in 1918 however and the family moved to one of the 4-roomed Island Cottages in Downside.

Daisy Irene Dance was born in 1898, her elder sister Rose Annie was one year older and a younger sister Violet died before she was 10. Rose and Daisy both attended St Matthews C of E School, Downside. A sampler that Daisy sewed is still kept at the school. Together with her older sister, Rose, she attended the Downside Sunday School and we have a certificate awarded to her for teaching Class III boys in 1913.

The Women's Land Army was set up by the government in 1917 to recruit women to work full-time on the land to help replace men who had left to fight in the war. Daisy may well have heard of the government appeal for 30,000 women to work on the land that was publicised in the Cobham Parish Magazine of May 1918. “The soldiers who have so far been able in many districts to give valuable help have now, owing to the great need for men to meet the onrush of the overwhelming enemy forces in France, been called away”. It went on to say that “several local Farmers are in great need of workers and it is desirable owing to the scarcity of housing accommodation to provide workers locally. Mrs. Kitching of Eaton Corner is the Cobham Registrar for Women's Work on the Land and has all necessary information including wages”.

Daisy enrolled in the Women's Land Army in Kingston on 28th March 1919 and she was issued 3 overalls, 1 hat, 2 pairs of breeches, 2 pairs of boots, size 8, 1 pair of canvas leggings and 1 pair of clogs. This was supplemented on the next day with a Mackintosh and a jersey. Her receipts for these items can be seen in her WLA Handbook.

The majority of women who worked in agriculture were milkers and field workers, but some were carters and ploughwomen (working with horses) and market gardeners. The main aim was to increase food production during the war. They were paid 18 shillings per week, increasing to 20 shillings after passing an efficiency test.

We have Daisy's Land Army Agricultural Service (LAAS) badge indicating two months approved service, her armband presented after three months of proficient service and her Good Service Ribbon presented to those who had served six months in the Land Army and had kept up a high standard of work and conduct.

There is a good chance that Daisy was part of the Peace Celebrations procession, reported in the Vicar's inimitable style in the Cobham Parish Magazine August 1919. “The bedrock industry of agriculture was charmingly presented by a bevy of land girls in charge of an excellent team whose chariot rolled happily under the auspices of a bewitching little angel of Peace, who must have refreshed the soul of the soldier-farmer at home.”

The Women's Land Army was officially disbanded on 30th November 1919 and it seems that Daisy continued working on the land, joining the Surrey Branch of the National Association of Landswomen. Their appeal for members in The Landswoman magazine in December 1919 explained that their aim was for “an efficient and conscientious body of workers. “Unity is strength” and we want a membership of at least 8,000. Membership subscription, 1d per week, payable quarterly in advance.”